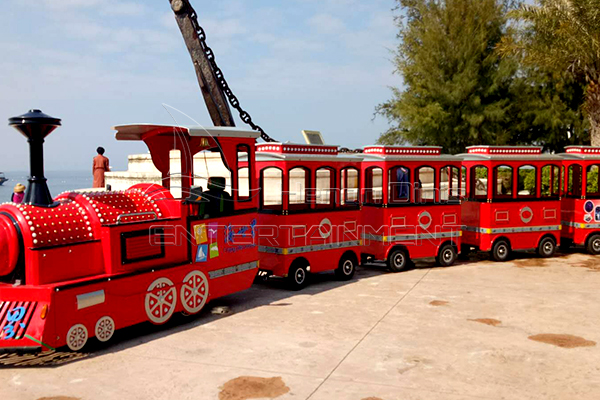 Our factory keeps pace with the times. On the one hand, we specializes in the production of amusement rides, that children love to play, parents like, and operators make money rides. On the other hand, the amusement trains produced by our factory are more than just play, but a ride that develops imagination and creativity too. Furthermore, the amusement park train rides are made of FRP, which is safe and environmentally friendly. Therefore, let the children take a safe and environmentally friendly amusement park train, parents are more assured. On the one hand, amusement park train set is novel and the color combination is lovelier. Both adults and children like it. What’s more, letting parents and children play together, it can enhance the spiritual exchange and bring the parent-child relationship closer.


How Does an Amusement Park Train Set Bring a Different Ride Experience?


What Kinds of Attractive Trains in the Amusement Park Train Set?

The new Thomas train can take up 14 passengers, each style with its unique appearance, brilliant colors, and exciting game play forms. So, these are deeply attracted to every customer who rides it. What’s more, according to the needs of our customers, we will also be equipped with lanterns and music. Thus, it will become even more charming at night. As you ride the Thomas train, you can experience the wonderful feelings and the feeling of being very happy.

The elephant track train is a new type of children’s amusement rides. Further, it is the latest small train. In the first place, the shape is very luxurious and beautiful. In the second place, compared with the previous small train, the FRP is more refined, the color is brighter and the lighting effect is very good. When your child is sitting in a colorful and beautiful train, the train will rotate slowly and slowly. Then they are so enjoyable and happy. Besides, the dense jungle and the crooked track increase the fun of children’s play. When the train is driving, it sometimes turns straight, or accelerates and decelerates. It seems that the children feel that they are driving in their own way.

With the rapid development of China’s amusement industry, theme parks have gradually emerged. At this time, there is an urgent need for an amusement rides, that can solve the traffic problem in the amusement park, but it does not affect the amusement park landscape. For instance, vintage train serves as a rail vehicle for amusement park. With a large passenger capacity, stable operation and beautiful shape, it has become the first choice for many amusement parks. Moreover, it is a hot train ride in Dinis. Finally, the locomotive mimics the appearance of an 18th-century steam locomotive, and add antique elements such as drums, chimneys, etc.


Don’t Hesitate to Invest in an Amusement Park Train Set, Grab the Opportunity to Make Money!

The money-making amusement equipment you want, Zhengzhou Dinis has it. For investors, they want to make the most money with the least amount of money. Of course, this is based on the same quality. So, do you think so? If so, don’t you come to Dinis Amusement Rides Factory to see how good the amusement train is selling? Don’t miss the opportunity to invest in this business!

Dinis is specialized in designing, production and selling carnival rides and playground equipment. Under the support of a group of excellent R&D personnel and skillful technical workers, products of our company are popular with all customers at home and abroad and enjoy high popularity. Our main products are merry-go-round, mini trains, self control machine, bumper car, human gyroscope, jumping machine etc. We have more than one hundred kinds of products. We have complete model, appropriate designs and good quality, get very positive market reflection. All products are under national amusement machinery manufacture quality standards. Meanwhile, we provide customized service, which can product equipment as customer’s special requirement. Our company welcome friends from all over the world to visit us.

WhatsApp us get latest price lists!